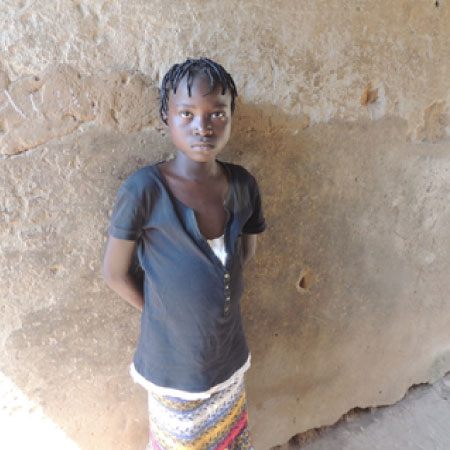 “Had it not been for the wonder truck, she would have died,” says Endurance Sabo. She is talking of the Wellness On Wheels (WoW) truck, an initiative of the USAID-funded Challenge TB project. “I call it the wonder truck because it has done wonders for us,” she continues, it was the medical staff onboard the truck who diagnosed her niece Rachel with TB, and ultimately got her on the treatment that saved her life.

The mobile facility is equipped with digital X-ray and GeneXpert and is bringing TB diagnosis to those who need it most in Nigeria. It travels to communities with high levels of TB, areas with limited access to TB services, and places with high-risk populations, such as slums and prisons.

Rachel lost both of her parents to HIV, and she is also HIV positive and on antiretroviral therapy to control the disease. Being an orphan means she now lived with her aunt, in Mararaba, a poor area in the outskirts of the capital Abuja. In 2017, her aunt spent all of her meager salary on trying to find out why her 11-year-old niece had been suffering from headaches, weakness, cough, chest pain, and especially anemia. Living with HIV means she is often sick, but this was new.

“Bit by bit Rachel’s life fell apart. First, she stopped playing, then she stopped eating, and finally she was too weak and thin to walk. She lost hope, and nothing made her smile, in the end, she couldn’t even stand without help,” said Endurance.

To find answers, her aunt had not only taken her to the local primary health care center but to several private clinics as well, all with no success. The last try was the state medical center, where the doctor thought Rachel may have TB, but to confirm it she needed to be tested at the laboratory. When Endurance saw how much it was going to cost, she knew it was beyond their means. But this time Rachel got lucky, as the WoW truck had recently arrived in the areas and was parked not far from the hospital. The doctor suggested that they tried to go there to get tested for free and they jumped at the opportunity.

After a short while in the queue, Rachel was taken into the truck and tested. The result was both a relief and a shock, she did have TB, but it was resistant to one of the drugs normally used to treat the disease.

The standard treatment for drug-resistant TB or DR-TB is notoriously hard, there are painful infections, and literally thousands of pills, which come with numerous side effects. But Rachel was put on a new shorter treatment regimen, this still meant 9-months of difficult treatment, but far less than the 24 months the previous treatment would have taken.

The family moved in with their grandparents so that her aunt could afford to take time away from her job to look after Rachel and to make sure she didn’t miss a single dose. Today Endurance cannot hide her happiness, her smile shows her relief, “Rachel’s health has been transformed, and she is back to her normal self,” she explains.

When Rachel was diagnosed, she was so emaciated she only weighed 19kg, which goes to show just how close she came to death. Now, 9-months later she has completed her treatment, and her weight is almost back to that of a normal girl her age, and she is strong and well again.

She is shy and doesn’t want to talk about what she went through, she wants to move past this devastating part of her short life and make up for lost time.