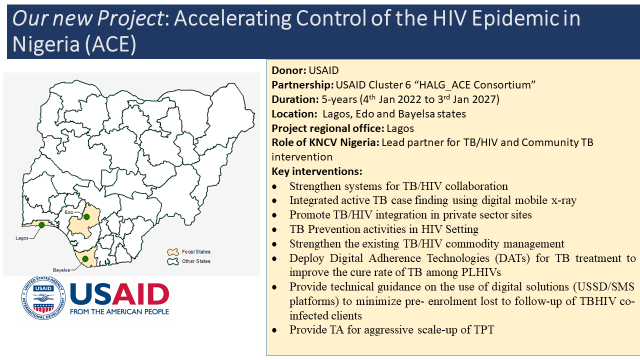 The project is the first TB treatment adherence technology to be implemented within the National TB program in Nigeria. It is focused on an integrated deployment approach, with different DAT options for patients and one unified application for the healthcare worker. The different DAT model helps to remind patients to take their medications, facilitate digital observation of pill-taking, compile dosing histories, triage patients based on their level of adherence, thereby facilitating the provision of individualized care by the TB program based on patients risks. The duration of the project is one year.

It has truly been an awesome five years of teamwork. I would like to express my sincere gratitude to the fantastic staff of KNCV Nigeria for the superb work done in the past five years – including during the global crisis that has recently emerged. The KNCV Board and all our partners have been very supportive all these years. The drive of our staff has been phenomenal and their commitment to fulfilling our vision and mission is beyond question. I know that we will continue to ensure that we find the missing TB cases in 14 states where we work in Nigeria as we strive to see a Nigeria free of tuberculosis. Our gratitude also goes to our funder, USAID for the resources as well as their technical guidance and to state TB program and facilities where we work. To the National TB Programme, we are grateful for their leadership and continued collaboration. KNCV Tuberculosis Foundation Nigeria is a local non-profit organization dedicated to the fight against tuberculosis (TB), the deadliest infectious disease in Nigeria. We are a national center of excellence for TB control that promotes effective, efficient, innovative, and sustainable tuberculosis control strategies in a national context. We opened our doors officially in Nigeria on the 8th of August 2016. It has been an awesome 5 years of teamwork, from the Challenge TB project to the USAID-funded WASP project and currently the USAID TB LON Regions 1 & 2 projects. The impactful TB control interventions in Nigeria are beyond question, through the years we haven’t lost sight of our vision to see a Nigeria free of Tuberculosis. It is with great pleasure that we announce and celebrate our 5th year Anniversary of impactful TB control interventions in Nigeria.

Nigeria is the first country in West Africa to provide people with tuberculosis (TB) access to the groundbreaking new BPaL treatment under operational research conditions. This six-month, three-drug,  oral treatment is meant for people with advanced forms of drug resistant TB and is expected to have a higher success rate than previous treatments with 4-6 medicines which lasted at least 18 months.

The BPaL regimen (consisting of the drugs pretomanid, bedaquiline and linezolid) was developed by TB Alliance and is implemented in Nigeria by the National TB Program (NTP), with support from KNCV Tuberculosis Foundation (KNCV).

“We are excited about this novel treatment option which will hopefully present much relief to our patients. Winning the battle against tuberculosis remains our core mission as KNCV”

The BPaL regimen has been approved by the U.S Food and Drug Administration (FDA), the European Medicines Agency (EMA), the Drug Controller General of India and recommended by the WHO under operational research conditions.

“The BPaL operational research is an intervention coming in at the right time to alleviate the suffering experienced by patients managed using the individualized regimen of 18 months with injectables. This will go a long way to provide quality treatment care and support for DR-TB patients across the country” 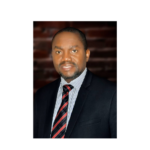 TB accounts for more than 10% of all deaths in Nigeria. Every hour, nearly 30 people die from the disease, despite effective treatments being available.

Most people can be cured of TB with a standard, inexpensive treatment. However, with XDR-TB conventional drugs do not work. Treatment is much longer (18 months) and less effective. According to the WHO, the cure rate of XDR-TB worldwide is only 57 percent as of 2020. However the new BPaL regimen (6 months, without injections) has shown a cure rate of 90 percent in clinical trials, according to Phase 3 trial results published in the New England Journal of Medicine.

The official roll- out in Nigeria started second week of April in Bauchi state with three other states namely, Lagos, Adamawa and Kano to follow.

Rika Iliya, who was first diagnosed in January 2021 is the first TB patient in Nigeria to be treated with the new, ground-breaking TB treatment: the BPaL regimen. This treatment for people with extensively drug-resistant tuberculosis (XDR TB) is much shorter than previous treatments. Painful, daily injections are no longer necessary. Above all, BPaL is expected to have a much higher success rate. This brings new hope to patients with this form of TB.

“I was referred to Abubakar Tafawa Balewa University Teaching Hospital (ATBUTH) from FCT TBLCP in Abuja where I had been on other treatment drugs but the weakness and coughing continued,” she says.

The doctor at ATBUTH Bauchi diagnosed XDR-TB and Ruth was admitted immediately. Prior to her been diagnosed, Ruth planned to write the West African Examinations Council (WAEC) in Bauchi. This examination is a graduation certificate awarded to most students in Nigeria. This she will do while living with her uncle in Bauchi since her parents will not be able to stay with her all through the exam period in another state due to their jobs; unfortunately, she became ill.  Her uncle is presently her guardian in Bauchi while she is receiving treatment.

“I can’t wait to get better and return to school. I do not want to miss my graduation examination” Ruth says.

But at the same time, she is hopeful.

“I feel so much better after starting the drugs last week, I am regaining my strength day by day”.

The 17-year-old High school student is now enrolled on BPaL and grateful that she has access to this new treatment.