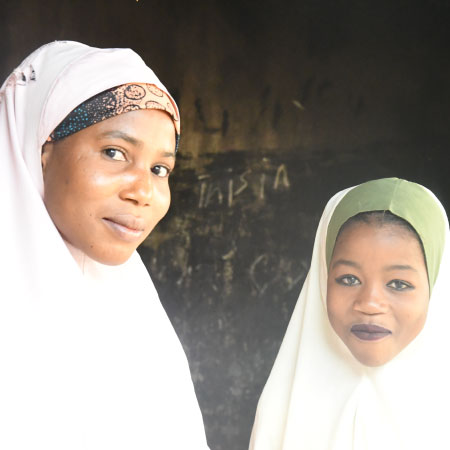 To say that Maryam Hassan’s life has been hard is an understatement. From the age of nine, she suffered from constant pain and fever, then came a loss of appetite, weight loss, nausea, and even swollen feet. She was living with her grandparents who tried to treat her with herbal remedies, but she did not recover, so they took her to a local pharmacist who pushed them to seek proper medical care at the hospital.

Maryam visited several hospitals but never got the treatment and care she so desperately needed, and her health only got worse. At one hospital she was treated for malaria, at the next for typhoid and malaria, she took dozens of antibiotics and pills, but nothing changed. Bedridden on and off for six months hope began to fade, until she finally saw a doctor at Murtala Specialist Hospital who did TB test. The result was positive.

Maryam’s situation is sadly not unique, her problem is just one of the many suffered by children in Nigeria, a country with one of the highest burdens of TB in the world. About 6,000 children were diagnosed with TB in 2017, but this is the tip of the iceberg with around 57,000 children estimated to be infected, many go undiagnosed and can succumb to the disease.

As a single mother, Maryam’s mother Fatima found it almost impossible to provide for her child, and her situation was so precarious she got married to help her survive. Even though she visited Maryam often, Fatima never stayed to look after her sick daughter, her new husband refused to allow it. After a while in the hospital, Maryam was strong enough to be discharged and to continue her treatment at home, and Fatima tried to bring her home. But her new husband refused to let her in his house, fearing he and his other children would get infected too. He forced Fatima to take Maryam to her grandparents instead.

Maryam took her drugs as instructed, but as time passed, she started to develop swollen lymph nodes on her neck and in her armpits, and two weeks before she was due to finish treatment she was so sick she went back to the doctor.

Then came the bombshell, Maryam was informed that she had been wrongly diagnosed, she did have TB, but it was multidrug-resistant TB (MDR-TB), a form which is resistant to some of the most important drugs used to treat the disease.

It was at this point, staff from USAID’s Challenge TB project stepped in to help. Maryam was referred to a specialized hospital in Zaria, that despite being 160 km away, this was the nearest health facility with bed space for MDR-TB patients.

Her stepfather again refused to allow Maryam’s mother to go with her daughter. He still thought that he would be at risk if Fatima contracted the disease. Fatima, on the other hand, did not want to lose her marriage, so she stayed back and kept on begging her husband for permission to take her daughter to the hospital. All the while, Maryam’s health got worse as she was not receiving any treatment.

Challenge TB counseled Fatima and her husband, they were educated on the dangers of MDR-TB, and the need for proper treatment. After several weeks, he finally relented and permitted Fatima to take her daughter to the hospital. Fortunately, by this time, there was bed space at the hospital in Kano, so Fatima took her daughter there. She was admitted for four months of care after which she was finally well and strong enough to be discharged to continue her treatment at home.

The Challenge TB team checked her family for TB and discovered that Fatima was also infected. This was the last straw for her husband, and he immediately divorced her and threw her out of the house. Fatima was again forced to return to her parent’s home with her daughter. Despite all the setbacks they endured they have now both completed their TB treatment and are free of TB.

Maryam is now 12-years-old and is strong and healthy enough to be back at school. She missed two years of her education, and all her former classmates are now ahead of her, but she is determined to get back on track and finish school.

Fatima is relieved that she only lost her marriage and not her daughter or her own life, “a small price to pay,” she says. She now works as a hairdresser and still hangs on to the hope that she will eventually find a good husband, one who will really love and care for both her and her daughter.

Challenge TB works across Nigeria to prevent the transmission of TB, improve access to TB care services, and to strengthen TB platforms. The project provides free testing, treatment support, and monthly stipends to ensure that patients get help and nutrition they need to complete their treatment successfully.