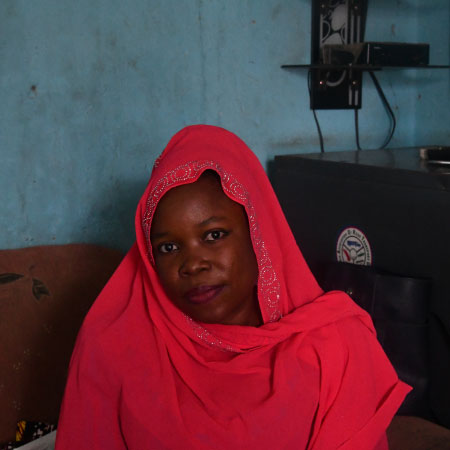 The story of Munirat Alhassan

Munirat Alhassan was not only the secretary of the National Association of Road Transport Organization in Nigeria, but also processed and sold cotton wool too. She worked hard so that she could take care of her three brothers and sisters because her father had suffered from a stroke and was unable to work.

That all changed when she got TB.

Before she found out she had the disease, she had visited the hospital in Kano for months trying to find out what was wrong. They treated her for a stomach infection, then malaria, then typhoid, and even amoebic dysentery. The only symptoms she had were abdominal pains, and it never crossed anyone’s mind to test her for the TB.

Munirat started seeking help beyond the regular health facilities, but nothing helped. It was her neighbor who finally came up with the solution when she advised her to visit the Challenge TB’s WoW truck which was parked up in Kano. The WoW truck offers free TB testing services in communities and provides rapid testing for people with TB symptoms. This enables people who live in hard to reach places or near facilities without the necessary testing equipment to be diagnosed with TB and placed on treatment as quickly as possible.

Despite making her way to the truck, Munirat was still reluctant to provide a sputum sample for testing. The Challenge TB team explained the process, and why it was so important, and in the end, she agreed.

She was diagnosed with multidrug-resistant TB (MDR-TB). The positive result was a shock but also a turning point for Munirat. She had become increasingly weak, and though she found it hard to accept the diagnosis, she finally knew what was wrong and most importantly, that it could be treated.

Munirat was so sick that she would have to be admitted to the hospital, but there were no available beds, and the nearest hospital with bed-space, was in Ogun State a massive 1,095 km from her home. They were out of options, and so she and her mother went, taking two full days to get there by bus.

After suffering pain in the stomach and chest, coughing, taking many pills, enduring painful injections, and being placed on a special diet, Munirat grew stronger, and she was discharged from the hospital after four months to continue treatment at home.

If it had not been for the support of her mother, it would have been impossible. She cooked and fed her daughter nutritious food, washed her clothes, and gave her bed baths, as she was too weak to move. But during the time they were away, things soured between Munirat’s parents. Her father divorced her mother, assuming she was tired of him and had gone off with another man. He simply could not believe Munirat had been bedridden for such a long time.

Meanwhile, the entire family suffered financially, and their fear for Munirat put a tremendous emotional burden on them too.

Munirat was forced to sell off furniture, and then even a grindstone that the family used to mill grains and nuts. All this so that she could afford the doctor’s fees she incurred before she got diagnosed.

After her diagnosis, Challenge TB provided free treatment and a monthly stipend for food, which helped to ease the burden on her and her family.

“I want to say a very big thank you to Dr. Mamman Bajehson from Challenge TB in Kano. First, he got me to do a TB test, and then he kept encouraging and advising me to keep up with the treatment even when I felt I was too weak to go on. Those 20 months of treatment were not easy, but the help of Challenge TB made it easier for me. They gave me free drugs, counseling, and testing, and they even bought us new grinding stone,” Munirat said.

Munirat has since completed her treatment and declared TB free, and none of her family members are infected. She has now resumed work as the secretary of the road transport organization and is moving past this episode in her life, that brought her and her family to their knees. In the end, she won, but there are many more like her out there, many of whom are yet to be diagnosed and have no idea they have TB.

Since it hit the road in 2018, the WoW truck in Kano has been trying to find these undiagnosed TB patients. So far, a total of 638 patients with TB have been found, 22 of whom had drug-resistant TB like Munirat. The search goes on.